J is for: Jolly Jello Shots 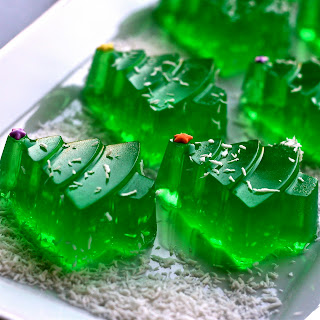 Calling these "Jello Shots" is sort of like an insult to these beauties. As I was told several times last night, they are a work of art. And they are. I took great care and calculated hours to make these as beautiful as they are tasty. And I'm not gonna lie, I was proud.

Yes, they contain alcohol in gelatin form, but these are a far cry from your typical college jello shot in a paper dixie cup. THESE are classy, sophisticated, and totally acceptable to drink/eat well into adulthood. Add in a few holiday themed colors and shapes, and these will become a staple at all of your holiday parties.

Since starting the food blog, I've actually been wanting to make jello shots for awhile. My cousin Erin made some amazing ones for my sister's bachelorette party and I'm a loyal follower of That's So Michelle and Jelly Shot Test Kitchen, so I'm crediting all of them with the inspiration behind these masterpieces. 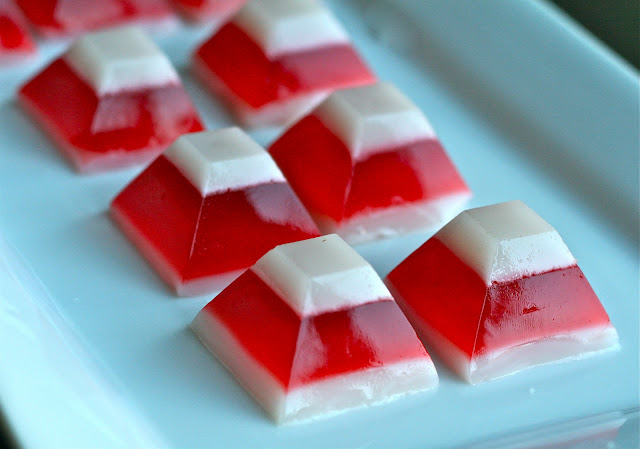 I'm not really going to post step-by-step photos because really, at the end of the day, you're just making jello in a mold. But follow the instructions and you can't go wrong. For the santa hats, you'll need a pyramid-shaped silicone mold. You'll also need a red and a white layer. For the red I used cherry jello and whipped cream vodka. For the white, I used coconut milk, gelatin, and whipped cream vodka. Although the trees turned out cuter...these were the favorite flavor combination. I think it also may have been cute to put mini marshmallows on top instead or in addition to the first white layer, but I forgot to get some at the store. (P.S. I also attempted red and white striped candy canes, but they were sort of a disaster so I won't recommend trying them.)

For the green trees, I used a special Christmas tree mold. For these, I used lime jello and a fruity vodka (Absolut SF), though the whipped cream vodka was such a hit, I would probably do that one next time for sort of a key lime pie effect. For garnish, I used coconut (for the snow) and little candy stars (found in the baking section of your local supermarket). 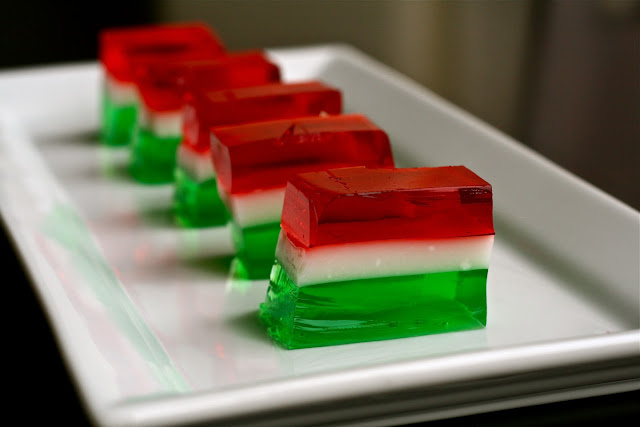 If you don't have these special molds and don't have time to order them online, you could always do a layered version in a loaf pan or square brownie pan by allowing each layer to set at least an hour and then overnight to fully bond each layer. You then cut them into squares or rectangles. I had leftover jello, so I also made one of these for a party I attended on Sunday.

Instructions
For the red layer:

For the white layer:

For the santa hats:

For the green trees:

For red, white and green shots without molds: